Pip is a recent arrival on Phillip Island and her work is bringing a touch of the unusual to the local arts scene.

Originally from Ayrshire in Scotland, Pip arrived in Victoria as a volunteer at the Inverloch Dinosaur Dig in the summer of 2007. Her involvement with the Dinosaur Dreaming project parallels her series of paintings of Australian animals, including Qantassaurus, a new species of Ornithopod dinosaur first discovered at Inverloch. It also led to her meeting and marrying local Palaeontologist Mike Cleeland, only the second time a couple has married as a result of meeting at our local Dig.

Her “animals” paintings presented here are “like an accident – as though the animals have surprised themselves by glancing in a mirror” she says. The detail and precision of her work is a progression from her former career as a professional make-up artist for film and television in the UK, where she was a successful special effects artist in several well known productions including Braveheart and Rob Roy.

Since arriving in Australia Pip has painted several more in the Animals series, as well as illustrating her husband’s books “The Fertiliser Bloke and Other Bush Verses” and “Sheep Dip”; and also completing a number of commissions.

She has recently exhibited at the Easter Art Exhibition in Mansfield and at the Art, Nature and Imagination exhibition at Monash Science Centre together with accomplished palaeoartist Peter Trusler. She is looking forward to diversifying her artistic talents into landscapes, abstracts, portraits and book illustrations. 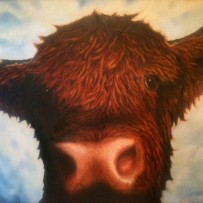 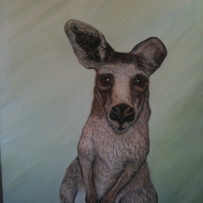 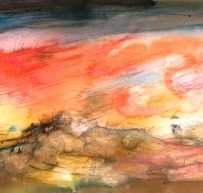 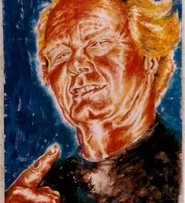 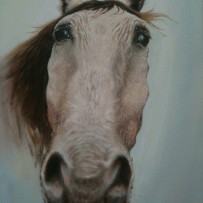 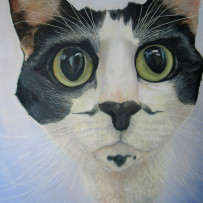